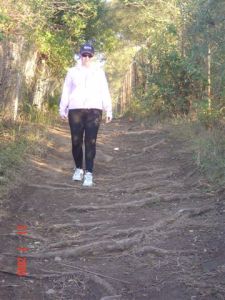 THE access to McCauley’s Beach for generations of Bulli Hill residents will become a footpath alongside a road through a new housing subdivision.

Wollongong City Council has told The Bulli Times that the Stockland subdivision will include a public road and pathway adjoining its southern boundary, which will provide a permanent access for nearby residents to walk to the beach.

A Council licence agreement between the previous site owners (BHP and Cookson Plibrico) in 1994 enabled community access along the common boundary of two properties.

The ‘track’, between separated boundary fences, was built by community volunteers and known as Wilkies Walk.

Council’s licence was terminated when Cookson Plibrico sold the land to Anglican Retirement Villages (ARV) in 2007.

During the period of Council’s licence, the public liability rested with Council and was included in the policy that covered all Council properties. A Council spokesperson said since that time, it has had no legal involvement or responsibility for Wilkies Walk, which was located on ARV land, nor with the temporary pathway constructed by Stockland.

Council said the temporary walkway was built on the site now owned by ARV.

What is left of Wilkies Walk on Bulli Hill, showing the old Dairy Farmers depot.

“Since the licence was terminated in 2007, the liability for an event or incident involving a member of the public on the land would first arise with the landowner,” the spokesperson said.

“The purpose of the temporary walking track is to enable east-west access for nearby residents while the Stockland subdivision works are being completed,” the spokesperson said.

“The Stockland subdivision includes a public road and pathway which provides permanent legal access to the foreshore for nearby residents.”

A Stockland spokesperson told The Bulli Times a pathway network is currently being formalised at McCauley’s Beach.

“Upon completion a walkway from Sturdee Avenue to the beach will continue to be available to the public,” the spokesperson said.

A journalist, writer and historian, Mick Roberts specialises in Australian cultural history, particularly associated with the Australian hotel and liquor industry. Mick has had an interest in revealing the colourful story of pubs, inns and associated industries in Australia for over 30 years. He is currently working on a comprehensive history of the hotel and liquor industry in the Illawarra region of NSW. Besides writing a number of history books, Mick has owned and managed several community newspapers. He was one time editor of the Wollongong Northern News, The Bulli Times, The Northern Times, The Northern Leader and The Local - all located in the Wollongong region. As a journalist he has worked for Rural Press, Cumberland (News Limited), Sydney based, City News, and Torch Publications based in Canterbury Bankstown, NSW. He currently calls the inner-Sydney suburb of Surry Hills home.
View all posts by Mick Roberts »
« Oztag championships return to Fairy Meadow
Have you seen this man? »