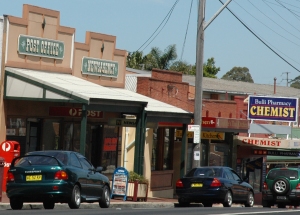 On street parking could be a thing of the past on the Princes Highway if RMS slap increased clearway conditions in Bulli shopping centre.

BULLI shopping centre will become a virtual ghost town if additional clearway restrictions are introduced on the Princes Highway, a move that will mean less parking for locals and make it nearly impossible for businesses to survive, according to State Labor MP for Keira Ryan Park.

Bulli Chemist owner Saul Duffy has told The Bulli Times the recent closure of the Bulli Post Office and Newsagent, as well as the butcher shop, has meant businesses in the heritage listed shopping centre are already struggling. He said restricting parking further would put the final nail in the coffin for Bulli.

“It’s hard going at the moment,” he said.

“We’re not sure how much more we can take.”

Clearway conditions are already in place between 6.30am to 9.30am in the southbound lane through Bulli shopping centre, and between 3pm and 6pm in the northbound lane.

A Roads and Maritime Services (RMS) spokesperson said it is investigating ways to improve traffic flow on the Princes Highway through Bulli, especially during the morning and afternoon peaks.

“Clearways currently operate on weekdays in both directions to help manage traffic.

“RMS is considering extending the clearways to help manage future traffic growth but no decision has yet been made.

“The community will be consulted about the proposal before any changes are made.”

The Bulli Times understands RMS is looking at increasing clearway conditions northbound in the morning, and southbound in the afternoon.

The extended clearways would ease traffic exiting and entering the nearby Northern Distributor.

Over 2,000 signatures have been collected calling for no further clearway conditions through Bulli.

Mr Parks said the plan must not happen.

“I have visited local business owners in Bulli who have made it very clear to me that if the NSW Liberal Government goes ahead with a plan to increase the Clearway times along the Princes Highway then it could be enough for them to close their doors,” he said.

“Everyone knows that small businesses are doing it tough at the moment. Parking is already limited in Bulli. What they don’t need is a Government to make it harder for them to make a living and support their local community,” he said.

Mr Park said he was pleased that over 2000 signatures had already been signed urging the NSW Government to reconsider this decision and he had written to RMS and the Minister to demand that this decision not go ahead.

A spokesman for State Liberal MP Lee Evans would not say whether the parliamentarian supported the clearway extension through Bulli shopping centre.

“My understanding is that a peak hour clearway has been proposed by the RMS and that Wollongong City Council is currently assessing the proposal though its traffic committee,” the spokesperson said.

“At this stage Mr Evans is collecting comments from residents for referral while the council makes its assessment.”

When asked by The Bulli Times if Council supported the proposal, a spokesperson said: “This is a question that is best asked of the ward councillors and the Lord Mayor (Gordon Bradbery)”.

Council said that the ultimate say over the traffic management and kerbside parking belonged to the RMS.

“Council is currently liaising with RMS to explore options that will assist local businesses and preserve the character of the village.”

The Bulli Times has contacted each of the north ward councillors, and the Lord Mayor, for comment.

Meanwhile Mr Parks said he intends raising the issue on the floor of Parliament when it resumes next month.

“Lee Evans needs to come out today and let the community know that he supports them and will join me in seeking to have this ill considered plan changed so that local businesses don’t hit the wall as a result,” he said.

“I will continue to work with local residents and small business owners to make the Government see that this decision is not in the interest of the long term survival of Bulli or the local economy more broadly,” he said.

A Sydney journalist, writer and historian, Mick Roberts specialises in Australian cultural history, particularly associated with the Australian hotel and liquor industry. Mick has had an interest in revealing the colourful story of pubs, inns and associated industries in Australia for over 30 years. He is currently working on a comprehensive history of the hotel and liquor industry in the Illawarra region of NSW. Besides writing a number of history books, Mick has owned and managed several community newspapers. He was one time editor of the Wollongong Northern News, The Bulli Times, The Northern Times, The Northern Leader and The Local - all located in the Wollongong region. As a journalist he has worked for Rural Press, Cumberland (News Limited), Sydney based, City News, and Torch Publications based in Canterbury Bankstown, NSW. He currently calls the inner-Sydney suburb of Surry Hills home.
View all posts by Mick Roberts »
« Northern Distributor speed camera under review
Changes to off leash dog area at East Corrimal beach »