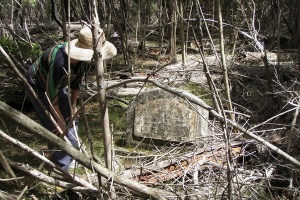 THE northern Illawarra’s forgotten cemetery has finally been remembered. Up to 2,000 burials – mainly deaths as a result of consumption – were made at Garrawarra Cemetery between 1909 and the mid-1950s.

Located in what could be described as an almost mystical bushland setting, north of the Garrawarra Hospital – a purpose-built tuberculosis facility established in the early 1900s – Wollongong City Council has made a commitment to preserve the historic site.

Council has been responsible for the cemetery since 1967 when management was transferred from the State Government. At the same time Council took over the management of Wollongong, Bulli, Scarborough and Helensburgh general cemeteries from the government.

Bush has encroached on the cemetery, damaging headstones.

Council says due to the complexity of the site and its surrounds, there has been confusion over the ownership and management responsibilities for the cemetery. The site is landlocked by Crown land managed by various state government departments.

Council last night voted to prepare a Conservation Management Plan for the cemetery, as well as finding access options.

Council will also develop a publicly available burial register for the site and consider the development of a ‘Friends of the Cemetery’ group.

The NSW Office of Environment and Heritage will be contacted by Council, offering support to their consideration to include the Garrawarra Hospital site, including the cemetery, for listing on the State Heritage Register.

Wollongong Lord Mayor Gordon Bradbery said people who have family buried in the cemetery will be contacted by Council.

“This is an intriguing situation and we’re asking for the community’s patience as we look into a viable solution for this site,” he said.

“We understand people might be interested to go out and visit the cemetery and we would ask them to hold off. It is in a difficult, isolated location with access only along fire trails. Even Council staff must get permission from state government agencies to visit the site.

“Council wants to work with the community to see this site restored and we will keep the community informed throughout the process.’’

A Sydney journalist, writer and historian, Mick Roberts specialises in Australian cultural history, particularly associated with the Australian hotel and liquor industry. Mick has had an interest in revealing the colourful story of pubs, inns and associated industries in Australia for over 30 years. He is currently working on a comprehensive history of the hotel and liquor industry in the Illawarra region of NSW. Besides writing a number of history books, Mick has owned and managed several community newspapers. He was one time editor of the Wollongong Northern News, The Bulli Times, The Northern Times, The Northern Leader and The Local - all located in the Wollongong region. As a journalist he has worked for Rural Press, Cumberland (News Limited), Sydney based, City News, and Torch Publications based in Canterbury Bankstown, NSW. He currently calls the inner-Sydney suburb of Surry Hills home.
View all posts by Mick Roberts »
« Historic pavillion re-opens tomorrow
Woonona pool reopens after major facelift »