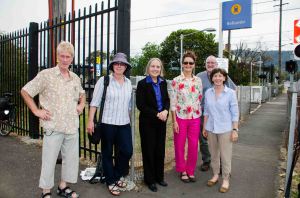 THE push to have Wollongong’s coal train wagons covered has stepped up a notch with Greens Senator Lee Rhiannon and Wollongong councillor Jill Merrin meeting with Illawarra Residents for Responsible Mining group at Bellambi station.

Cr Merrin said people who live anywhere near the South Coast Railway in Wollongong know about the constant black dust they have to wash off their houses.

“That same dust is lining their lungs and the lungs of their children,” Cr Merrin said.

Cr Merrin said while the NSW Environment Protection Authority have been testing the air quality for particulate matter near railway lines in the Hunter, the same level of care and concern along Wollongong’s train corridors has not been followed.

Illawarra Residents for Responsible Mining and the Greens are also calling on both the state and federal governments to improve air quality monitoring from coal dust from uncovered coal train wagons.

Senator Rhiannon said four of the air-monitoring stations in the Illawarra have been decommissioned, with only three now active at Albion Park, Albion Park South and Wollongong.

“It appears the Illawarra is the poor cousin to the Hunter when it comes to state government attention to the risks of coal related respiratory and other health problems,” she said.

“In the Hunter an Air Pollution Expert Advisory Committee has been set up and NSW Health has invested funding in research and more accurate air quality monitoring.

“Fine particles from coal dust are a particular health risk for people with heart or lung disease, older adults and children.

“Ultra fine particles are more dangerous due to their size and ability to be trapped deep in the lungs.

“Illawarra residents have for too long copped poor air quality as a result of being home to polluting industries and its location downwind from Sydney.”

Senator Rhiannon said both the State and federal governments must act to better protect and improve air quality in the Illawarra region.

“Covering coal train wagons, in a similar way to coal trucks, is an important start,” she said.

A Sydney journalist, writer and historian, Mick Roberts specialises in Australian cultural history, particularly associated with the Australian hotel and liquor industry. Mick has had an interest in revealing the colourful story of pubs, inns and associated industries in Australia for over 30 years. He is currently working on a comprehensive history of the hotel and liquor industry in the Illawarra region of NSW. Besides writing a number of history books, Mick has owned and managed several community newspapers. He was one time editor of the Wollongong Northern News, The Bulli Times, The Northern Times, The Northern Leader and The Local - all located in the Wollongong region. As a journalist he has worked for Rural Press, Cumberland (News Limited), Sydney based, City News, and Torch Publications based in Canterbury Bankstown, NSW. He currently calls the inner-Sydney suburb of Surry Hills home.
View all posts by Mick Roberts »
« Backyard festival offers the right advice
Bulli ED does ‘a terrific job’ says federal health minister »