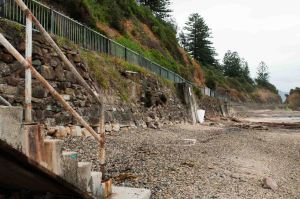 EXCAVATIONS took place on the base of the historic seawall between the Continental Pool and the ‘cutting’ south of the North Beach Bathers Pavilion this week.

The investigation work is being carried out by Wollongong City Council to provide geotechnical information to assist with the design for the replacement of the seawall at this site.

The sea wall is part of the former Mount Pleasant tramway, built in the early 1860s, and identified as having heritage significance by the NSW Government.

The Mt Pleasant tramway alignment, cutting and embankment was once the permanent way along which, from the 1860s to 1933, coal wagons were conveyed from the coal mine to Wollongong Harbour.

On Tuesday 14 test pits were excavated on the seaward side of the cycleway, at the base of the existing seawall.

Additional geotechnical work is being scheduled for the week of November 19 to 23 using a drilling machine located on the shareway.  This will require a partial closure of the shareway during the day and the public may experience some delays.  Council is asking the public to use the alternative route via Cliff Road during this time.

Council said it apologises for any disruption caused while this work is underway.

A Sydney journalist, writer and historian, Mick Roberts specialises in Australian cultural history, particularly associated with the Australian hotel and liquor industry. Mick has had an interest in revealing the colourful story of pubs, inns and associated industries in Australia for over 30 years. He is currently working on a comprehensive history of the hotel and liquor industry in the Illawarra region of NSW. Besides writing a number of history books, Mick has owned and managed several community newspapers. He was one time editor of the Wollongong Northern News, The Bulli Times, The Northern Times, The Northern Leader and The Local - all located in the Wollongong region. As a journalist he has worked for Rural Press, Cumberland (News Limited), Sydney based, City News, and Torch Publications based in Canterbury Bankstown, NSW. He currently calls the inner-Sydney suburb of Surry Hills home.
View all posts by Mick Roberts »
« Search for sunken boat called off after help from Polair
Get your garden in shape for recycling »