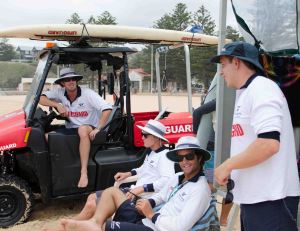 WOLLONGONG’S lifeguards have an international addition to their summer ranks.

Richard, 22, has swapped his home beach in Lawrencetown, Canada, for the surf and sands of Austinmer Beach. The exchange program between Council and the Nova Scotia Lifeguard Service has been in place for more than 20 years.

“This program provides the lifeguards with the opportunity to learn new techniques and skills in a different environment, while also enhancing the strong relationship we have between the two services,” Wollongong City Council’s Recreation Services Manager Jason Foye said.

“Our lifeguards get the chance to work on Nova Scotia’s lakes, while the Canadian recruit gets a taste of our often heavy surf conditions.”

Richard has been looking after swimmers on Austinmer beach since December 22. So far he has really enjoyed the challenge and the different conditions.

“We’re lucky to get water temperatures pushing 20 degrees at home in the peak of summer, so it’s nice not to have to wear a wetsuit in the water,” he said.

“I’ve always wanted to see Australia, and this is a great opportunity to escape Nova Scotia’s cold winter and come Down Under. Plus, I get to develop my skills as a lifeguard.”

One new experience Richard could have done without are bluebottles. Since reporting for duty, he has been stung and is now well-versed in the best way to treat them which is to wash the stingers off with fresh, cold water and then apply ice.

Richard is with Council until the end of January. He will then take a month to travel before heading home.

A journalist, writer and historian, Mick Roberts specialises in Australian cultural history, particularly associated with the Australian hotel and liquor industry. Mick has had an interest in revealing the colourful story of Australian pubs and associated industries for over 30 years. He is working on a comprehensive history of the hotel and liquor industry in the Illawarra region of NSW. Besides writing a number of history books, Mick managed several community newspapers. He has been editor of the Wollongong Northern News, The Bulli Times, The Northern Times, The Northern Leader and The Local - all located in the Wollongong region. As a journalist he has worked for Rural Press, Cumberland (News Limited), the Sydney city newspaper, City News, and Torch Publications based in Canterbury Bankstown, NSW.
View all posts by Mick Roberts »
« More hot weather on the way
Survey to gauge views on management of coastal dunes »