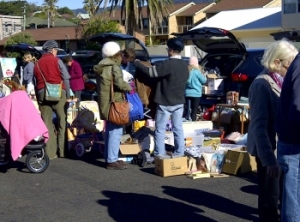 IT’S time to register for a coveted car space at Wollongong City Council’s next Giant Car Boot Sale at Towradgi.

The Giant Car Boot Sale will be on Saturday April 14 from 9am-2pm in the car park at Towradgi Beach Hotel. Registrations are due before 5pm, Monday April 8.

The trash and treasure sales are hosted by Council twice a year as a way to encourage people to reduce, reuse and recycle. Car spots are always popular with sellers looking to make some extra money by re-homing everyday items.

Wollongong Lord Mayor Gordon Bradbery is encouraging everyone who is interested in getting involved in the Giant Car Boot Sale to book their spots early.

“At September’s sale we had space for 42 cars, and ended up with 35 cars on the waiting list. There’s no doubt, this is a popular event,” he said.

More than 2500 people came to the Giant Car Boot Sale that was held as part of Spring Into Corrimal celebrations. The most popular items sold included clothes, books, furniture and knickknacks.

People can register by contacting Council’s Customer Service Team, or visiting the website.

A Sydney journalist, writer and historian, Mick Roberts specialises in Australian cultural history, particularly associated with the Australian hotel and liquor industry. Mick has had an interest in revealing the colourful story of pubs, inns and associated industries in Australia for over 30 years. He is currently working on a comprehensive history of the hotel and liquor industry in the Illawarra region of NSW. Besides writing a number of history books, Mick has owned and managed several community newspapers. He was one time editor of the Wollongong Northern News, The Bulli Times, The Northern Times, The Northern Leader and The Local - all located in the Wollongong region. As a journalist he has worked for Rural Press, Cumberland (News Limited), Sydney based, City News, and Torch Publications based in Canterbury Bankstown, NSW. He currently calls the inner-Sydney suburb of Surry Hills home.
View all posts by Mick Roberts »
« Increased parking proposed for Bald Hill
Double demerits kick in from midnight »