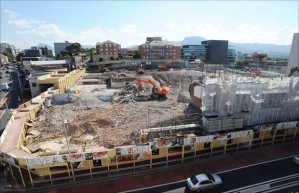 WOLLONGONG is undergoing major growth with more than $500 million in new development in the city taking place.

At present there are several major developments taking place. These include the $19 million Crown Street Mall refurbishment and the $200 million expansion of GPT Crown Central.  Other major sites being developed include:

Gateway Wollongong Pty Ltd is preparing a masterplan for the site to be submitted to Council.

“We are also currently seeing renewed interest in some key major sites across our city with the finalisation of a number of property transactions from large publicly listed funds management companies.

“Institutional based investors look very critically at their investments with a risk based approach being conducted through a vast network of resources,” Cr Bradbery said.

“Recent investment in our city at this level is a strong indicator Wollongong is being viewed as a place of opportunity.”

On the other end of the scale there are a number of innovative, small businesses popping up around the city with more than 10 small bars, cafes and galleries opening in a matter of months.

“Active street frontages, vibrant spaces and a diverse evening economy will culminate to deliver a city where people want to live, work and enjoy their leisure time,” Mr Grimson said.

“The large investment currently coming in to our city can partly be attributed to a renewed focus on getting the street level components of our city right first – it’s paying off.”

Council has also announced consent has been granted for generic outdoor dining within Crown Street Mall, Globe Lane, and the Arts Precinct. The approvals will significantly reduce the complicated process for restaurant and café owners within these precincts to operate outdoor dining and further demonstrates Council’s commitment to the achieving a vibrant and liveable city.

“We have lower rental costs, without compromising on skills and service delivery,” Mr Grimson said.

“If successful the strategy will provide greater employment opportunities for Wollongong community members and enable a number of development approved sites in the city the opportunity to get off the ground.

“The City’s Revitalisation is well underway and combined with our world-class university, coastal lifestyle, burgeoning cosmopolitan café scene and the benefits of the early roll out of the National Broadband Network, Wollongong is truly establishing itself as a great place to live, learn, work and do business.”

A Sydney journalist, writer and historian, Mick Roberts specialises in Australian cultural history, particularly associated with the Australian hotel and liquor industry. Mick has had an interest in revealing the colourful story of pubs, inns and associated industries in Australia for over 30 years. He is currently working on a comprehensive history of the hotel and liquor industry in the Illawarra region of NSW. Besides writing a number of history books, Mick has owned and managed several community newspapers. He was one time editor of the Wollongong Northern News, The Bulli Times, The Northern Times, The Northern Leader and The Local - all located in the Wollongong region. As a journalist he has worked for Rural Press, Cumberland (News Limited), Sydney based, City News, and Torch Publications based in Canterbury Bankstown, NSW. He currently calls the inner-Sydney suburb of Surry Hills home.
View all posts by Mick Roberts »
« Step back in time for Wollongong Heritage Festival
Looking Back: Coal miners established oldest club »