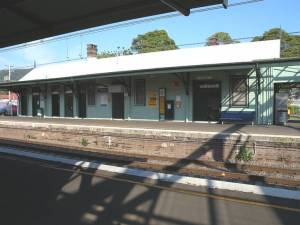 AN infestation of termites has caused so much damage to Thirroul’s historic railway station building that it is beyond saving, says RailCorp.

The Bulli Times broke the news on Thursday that the 125-year-old heritage listed railway station was under threat of demolition.

RailCorp have lodged an application with the NSW Planning Department to rase the building on the station’s island or ‘down’ platform.

The buildings at Thirroul are one of the last remaining working timber station buildings on the South Coast Line and are on the NSW Government’s State Heritage Listing.

A RailCorp spokesperson confirmed the application to replace the station building when approached by The Bulli Times, saying the timber structure has severe termite damage and is in a state of disrepair.

“Over the last two years, as routine repairs and painting works were carried out, the severity of the building’s condition became apparent,” the spokesperson said.

“We commissioned building and structural engineering reports and an independent assessment, which all concluded the building is in severe disrepair and cannot be saved.”

RailCorp aims to replace the current structure with a new building which will cover the same footprint and retain features from the original building deemed to be of heritage significance.

The new design is on display at Wollongong City Council. A copy is also available to view from the Thirroul Station Manager.

RailCorp says the station building is predominantly used as a storage and waiting room for customers catching trains south to Wollongong. The building will remain open throughout the application process. 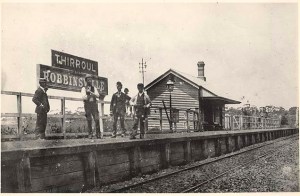 A 1891 image of the building proposed to be demolished at Thirroul.

A Wollongong City Council spokesperson said the Thirroul buildings are listed as having State Heritage significance on the Wollongong Local Environmental Plan 2009.

The proposal has caused an outcry from the Thirroul community, who want the building preserved and restored.

Thirroul Branch of the Australian Labor Party president Chris Lacey has condemned the plans to demolish the station.

“We are outraged that Thirroul’s railway and community heritage could be treated with such disrespect, and will mobilise a campaign to oppose any plans to demolish the station,” he said.

“We call on RailCorp to immediately withdraw its development application and start a consultation process with the community about whatever its plans for future development are.”

A Sydney journalist, writer and historian, Mick Roberts specialises in Australian cultural history, particularly associated with the Australian hotel and liquor industry. Mick has had an interest in revealing the colourful story of pubs, inns and associated industries in Australia for over 30 years. He is currently working on a comprehensive history of the hotel and liquor industry in the Illawarra region of NSW. Besides writing a number of history books, Mick has owned and managed several community newspapers. He was one time editor of the Wollongong Northern News, The Bulli Times, The Northern Times, The Northern Leader and The Local - all located in the Wollongong region. As a journalist he has worked for Rural Press, Cumberland (News Limited), Sydney based, City News, and Torch Publications based in Canterbury Bankstown, NSW. He currently calls the inner-Sydney suburb of Surry Hills home.
View all posts by Mick Roberts »
« Thirroul’s historic station threatened with demolition
Environment court visits Sandon Point »