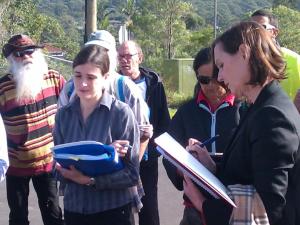 The Land and Environment Court Visit to Sandon Point.

The Land and Environment Court was taking evidence at Sturdee Avenue in regard to the Anglican Church’s appeal against Wollongong City Council’s refusal to grant them a development application to build on the Cookson PIlbarco site and Turpentine Forest.

About 50 residents including Sandon Point Aboriginal Tent Embassy (SPATE) and members of the Illawarra Aboriginal community gathered at the ARV site near Sturdee Avenue Bridge, Bulli, to speak their objections to the development proposal at Wollongong City Council.

There were 17 speakers, including South Coast Labour Council president Arthur Rorris who said overdevelopment must be avoided and we need to preserve the green corridor and Aboriginal heritage.

Illawarra Local Aboriginal Lands Council CEO Sharralyn Robinson explained why it is so important to respect the land and Aboriginal culture, as well as the history. She revealed that there are still 38 Aboriginal bodies held in the Sydney Museum that must be returned to their rightful Illawarra place for reburial.

Roy Dootch Kennedy on behalf of SPATE spoke of the onsite burials that have been disrespected by successive governments, and how the community’s struggle is not for personal gain but the protection of cultural heritage.

Residents also spoke about what the land means to them. Others voiced the need for an independent anthropological study, the recommendation of a return of the turpentine forest to the community by the Sandon Point Commission of Inquiry 2003; the threat of flooding from creeks to the proposed nursing home and 250 aged care units, and the need to protect remaining land for a regional coastal park as recommended by the Commission of Inquiry.

The case will continue at the Land and Environment Court, Macquarie Street Sydney.

Jill Walker is a long-term activist for a coastal park at Sandon Point – Editor.

A Sydney journalist, writer and historian, Mick Roberts specialises in Australian cultural history, particularly associated with the Australian hotel and liquor industry. Mick has had an interest in revealing the colourful story of pubs, inns and associated industries in Australia for over 30 years. He is currently working on a comprehensive history of the hotel and liquor industry in the Illawarra region of NSW. Besides writing a number of history books, Mick has owned and managed several community newspapers. He was one time editor of the Wollongong Northern News, The Bulli Times, The Northern Times, The Northern Leader and The Local - all located in the Wollongong region. As a journalist he has worked for Rural Press, Cumberland (News Limited), Sydney based, City News, and Torch Publications based in Canterbury Bankstown, NSW. He currently calls the inner-Sydney suburb of Surry Hills home.
View all posts by Mick Roberts »
« Termite damage blamed on Thirroul building’s demise
Appeal to catch Helensburgh robbers »