Looking Back: Timber mill closure end of an era 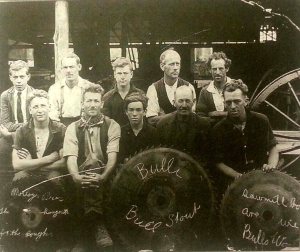 Employees of Molloy Timber Yard in the 1920s. Can anyone identify the men? Contact the Bulli Times.

MORE than a century of sawmilling at Bulli has come to an end with the closure of Molloy’s Timber Yard.

Austrian-born cabinetmaker Gunter Grafenauer operated Molloy Timber with his wife, Pamela, for 38 years before shutting the business for good in May 2013.

The Molloy Street business will be redeveloped into a large industrial complex.

Mr Grafenauer bought his company in 1975 from the Molloy family, who opened a steam-driven sawmill called Molloy Brothers on the opposite side of the road in 1906, later moving into the large corrugated iron shed that has become a Bulli landmark.

Mr Grafenauer told the Illawarra Mercury in March 2013 that his decision to sell his business was difficult but, at almost 73, he wanted to spend more time pursuing his other passion – skiing.

Mr Grafenauer migrated from Austria in 1960 where he had learnt his craft by restoring antiques and palace doors that were destroyed during World War II. When he arrived in Wollongong, he built cottages and was a regular customer at the timber shop owned by Arthur Molloy, the father of the four Molloy brothers.

For the past 20 years, Mr Grafenauer, besides continuing to sell and mill timber, has run woodworking classes, teaching hundreds of Illawarra men – and a few women – to craft beautiful furniture and children’s toys to his meticulous standards.

The closure of Molly’s Timber ends a significant chapter in Bulli’s industrial history.

The late Jack Devitt recalled his memories of Molly Timber in his regular Bulli Times column, Down Memory Lane in the 1990s. His column was a popular and informative feature in the hardcopy newspaper for many years. Jack’s regular column recalled life in Bulli during the 1920s and 30s.

Read the full story at the Looking Back website.

A Sydney journalist, writer and historian, Mick Roberts specialises in Australian cultural history, particularly associated with the Australian hotel and liquor industry. Mick has had an interest in revealing the colourful story of pubs, inns and associated industries in Australia for over 30 years. He is currently working on a comprehensive history of the hotel and liquor industry in the Illawarra region of NSW. Besides writing a number of history books, Mick has owned and managed several community newspapers. He was one time editor of the Wollongong Northern News, The Bulli Times, The Northern Times, The Northern Leader and The Local - all located in the Wollongong region. As a journalist he has worked for Rural Press, Cumberland (News Limited), Sydney based, City News, and Torch Publications based in Canterbury Bankstown, NSW. He currently calls the inner-Sydney suburb of Surry Hills home.
View all posts by Mick Roberts »
« Remembering Illawarra diggers online
Plenty to do these school holidays »

One thought on “Looking Back: Timber mill closure end of an era”