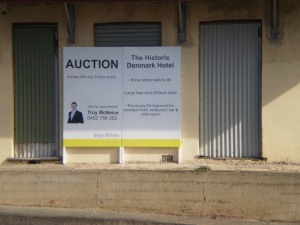 BULLI’S treasured heritage buildings have never been more at risk, with several landmarks either vandalised, threatened with demolition, or in a state of ruin.

A spokesperson said it has no specific powers to enforcing the maintenance and conservation of heritage items.

“This issue has been raised by Council as a matter of concern to the State Government on numerous occasions, and as recently as within Council’s submission to the NSW Governments Planning White Paper in June 2013,” a spokesperson said.

“As a result, the most productive way of working toward the conservation of a site is generally to work with the owner of the building to try and achieve a positive conservation outcome.”

“Each of these buildings presents different circumstances and Council’s heritage staff are working with the owners of each property, using the powers available to try and negotiate and advocate for positive outcomes.  For example, development consent was recently issued in relation to the Bulli Courthouse and Police Station to allow for the two buildings to be adaptively re-used as residences,” the spokesperson said.

Bulli Courthouse and Police Station: Council’s heritage Staff have been providing advice to the new owners of the Bulli Court House and Police Station since its purchase. Minor works exemptions have also been issued to allow the owner to complete critical works aimed at ensuring the immediate protection of the building, particularly from roof leaks and drainage/guttering problems. Council has recently issued a development approval for the adaptive re-use of both buildings as residences and is expecting work to commence shortly. This will provide for the conservation and interpretation (through conditions on the development consent) of the Courthouse and Police Station/Residence.

The Former Railway Guest House: As a requirement of the development consent for the Bulli Woolworths development, the owner of the site is required to develop a Conservation Management Plan for the former Guest House building. This was a condition of Council’s Development Consent and is intended to guide future conservation works for the property. As noted above, Council has no powers to enforce minimum standards of maintenance and repair.

The Former Seaview Guesthouse: The former guest house is owned by the NSW Government through the RMS.  The State has its own heritage asset management responsibilities under Section 170 of the NSW Heritage Act 1977. The RMS recently obtained development consent for the demolition of this building.

Bulli Miners Cottage: During last financial year, Council undertook a range of maintenance works on the Bulli Miners Cottage and its site to ensure the ongoing conservation of the building. The fencing to the site was also repaired during this time. These works were informed by a full building condition audit and this is now being used to inform Council’s considerations relating to the appropriate future use and management of the Miners Cottage. The site is subject to regular inspections including termite monitoring and treatment.

A Sydney journalist, writer and historian, Mick Roberts specialises in Australian cultural history, particularly associated with the Australian hotel and liquor industry. Mick has had an interest in revealing the colourful story of pubs, inns and associated industries in Australia for over 30 years. He is currently working on a comprehensive history of the hotel and liquor industry in the Illawarra region of NSW. Besides writing a number of history books, Mick has owned and managed several community newspapers. He was one time editor of the Wollongong Northern News, The Bulli Times, The Northern Times, The Northern Leader and The Local - all located in the Wollongong region. As a journalist he has worked for Rural Press, Cumberland (News Limited), Sydney based, City News, and Torch Publications based in Canterbury Bankstown, NSW. He currently calls the inner-Sydney suburb of Surry Hills home.
View all posts by Mick Roberts »
« Bob in Bulli for Thirroul’s centenary
Girl approached at Stanwell Tops »