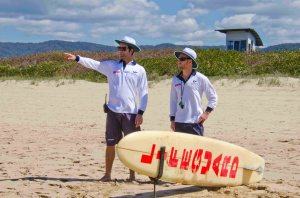 LIFEGUARD amenities at Coledale, Sandon Point and Towradgi have been upgraded as beach goers prepare for the start of the 2013-2014 swim season this Saturday.

Wollongong City Council lifeguards will be patrolling the 17 beaches between Stanwell Park and Windang from Monday to Saturday, with volunteer Surf Lifesavers patrolling on Sundays and public holidays. Patrols will continue until the end of the Easter school holidays in 2014.
Council’s pools will also open for the season on September 21.

Council’s Recreational Services Manager, Mark Bond, said that lifeguards have been preparing for another busy season in the lead-up to this weekend’s launch.

“Last season we were fortunate not to have any fatalities on Wollongong’s beaches, and we’d like to repeat that in 2013-2014.

“We’re asking visitors and locals at our beaches to take precautions and ensure their safety this season. Always check conditions before entering the water, listen to lifeguards, and remember if there’s no flags, there’s no swimming. It’s just not worth the risk, no matter how calm the water might look.”

Mr Bond said Council had been working hard both on and off-season to improve people’s understanding of beach safety.

“We’ve taken our Surf Education program to 7,300 students in the local area, to teach them how to enjoy our beaches safely. Our staff have also given talks to high school students in the western suburbs of Sydney, as lots of people from that area visit our beaches in the warmer months,’’ Mr Bond said.

“We’ve added QR codes to our patrolled beach signs, so people can quickly get specific water safety information on local conditions using their smart phones, and we’re working with Surf Life Saving Australia to provide real-time updates through their Beachsafe app.”
Lifeguard amenities at Coledale, Sandon Point and Towradgi have recently been upgraded, and Council is working to improve patrol sightlines through its Dune Management program.

A new emergency response beacon will be placed at the southern end of City Beach so in an emergency situation people can get a direct link to Lifeguards during patrol hours. This new feature is similar to the  beacon which was introduced near Puckey’s Beach last year.

Council has also produced a series of four short videos to show people the rules of the beach, and focus on three of our most dangerous beaches – Puckey’s, Coniston and Stanwell Park.

More information and the video can be found at Council’s website.

A Sydney journalist, writer and historian, Mick Roberts specialises in Australian cultural history, particularly associated with the Australian hotel and liquor industry. Mick has had an interest in revealing the colourful story of pubs, inns and associated industries in Australia for over 30 years. He is currently working on a comprehensive history of the hotel and liquor industry in the Illawarra region of NSW. Besides writing a number of history books, Mick has owned and managed several community newspapers. He was one time editor of the Wollongong Northern News, The Bulli Times, The Northern Times, The Northern Leader and The Local - all located in the Wollongong region. As a journalist he has worked for Rural Press, Cumberland (News Limited), Sydney based, City News, and Torch Publications based in Canterbury Bankstown, NSW. He currently calls the inner-Sydney suburb of Surry Hills home.
View all posts by Mick Roberts »
« Teen charged after police chase in Corrimal
Garawarra nominated for World Heritage status »