Historic Thirroul pavilion to get facelift 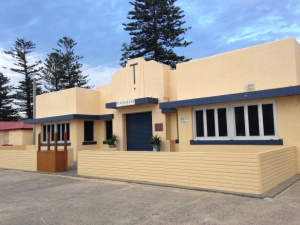 THE detailed design for a refurbishment of the Thirroul Beach Bathers Pavilion will be on display this Sunday.

An onsite information kiosk will be set up at Thirroul Beach Reserve between 10am-12 noon, during the Thirroul Seaside and Arts Festival, and community members have a chance to see what’s planned for the Pavilion and ask questions about the works.

The refurbishment of the existing building, including the old manager’s residence, is due to start in August. A Development Application for the project was granted in 2011, and the design was developed in consultation with the local community.

The refurbishment includes improvements to the public amenities – new toilets, showers and change rooms – as well as changes to the kiosk’s kitchen. The building’s power, stormwater, water and sewer services will also be upgraded. All the heritage aspects of the residence’s exterior will be kept.

While the works are carried out, access to the beach, surf club and pool will not be affected. Temporary toilets will be provided during the construction period and it’s anticipated with good weather conditions the work will take about 12 months.

Council has allocated a total of $3.2 million for the project which includes design, construction and project management costs. This includes a $2.448 million loan under the Local Government Infrastructure Renewal Scheme.

If you want to find out more, information on the refurbishment is also available on Council’s website and at Thirroul Library. Comments about the works must be received by Friday April 17.

A journalist, writer and historian, Mick Roberts specialises in Australian cultural history, particularly associated with the Australian hotel and liquor industry. Mick has had an interest in revealing the colourful story of pubs, inns and associated industries in Australia for over 30 years. He is currently working on a comprehensive history of the hotel and liquor industry in the Illawarra region of NSW. Besides writing a number of history books, Mick has owned and managed several community newspapers. He was one time editor of the Wollongong Northern News, The Bulli Times, The Northern Times, The Northern Leader and The Local - all located in the Wollongong region. As a journalist he has worked for Rural Press, Cumberland (News Limited), Sydney based, City News, and Torch Publications based in Canterbury Bankstown, NSW. He currently calls the inner-Sydney suburb of Surry Hills home.
View all posts by Mick Roberts »
« Man charged over train assault
Government cancels exploration licenses »