BULLI has made the record books with its new $5 million landslide fence.

Most have heard of Western Australia’s rabbit fence. When completed in 1907, the rabbit-proof barrier stretching 2,023 miles (3,256 km) through Western Australia, was the longest unbroken fence in the world.

Now Bulli has made the record books, as the Roads and Maritime Services’ project to install safety fencing to prevent rock falls and improve safety for motorists nears completion. Although not quite as impressive in length as Western Australia’s rabbit barrier, Bulli Pass’ landslide fence, once completed, will be the longest of its kind in Australia, climbing 1.1kms along the escarpment.

The first stage of work on Bulli Pass is almost complete and the road will be opened three days ahead of schedule. The news comes after northern suburbs residents have endured almost two months of unprecented traffic congestion as a result of the historic road’s closure.

Bulli Pass will now be reopened at 3pm on Friday December 2, just in time for the first weekend of summer.

During the first stage of safety improvements, fencing has been installed in the highest risk sections. Once fully installed, this will be the longest fence of its kind in Australia.

Since the Pass’ closure on October 4 there have been 447 rock anchors installed, 86 concrete pads and 86 posts installed, around 600 metres of netting and more than 180 square metres of rock netting in gullies.

The community will be updated about the second closure to complete the rock fall fence installation in early 2017.

NSW Parliamentary Secretary for the Illawarra and South Coast Gareth Ward said to have to reopen the road three times due to major crashes on Mount Ousley Road and still finish early is a great effort by Roads and Maritime and contractors involved.

“What has been achieved since the Pass was closed on October 4 is remarkable,” he said.

To see progress and work being carried out, a video including drone footage is available at rms.nsw.gov.au/bullipassclosure. 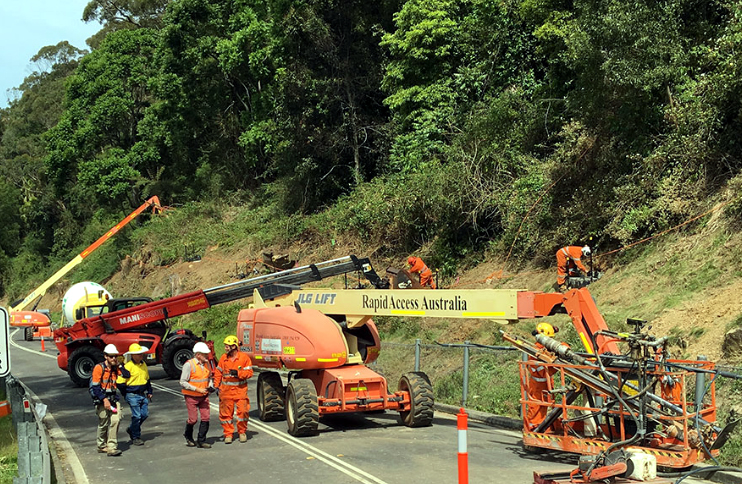 A Sydney journalist, writer and historian, Mick Roberts specialises in Australian cultural history, particularly associated with the Australian hotel and liquor industry. Mick has had an interest in revealing the colourful story of pubs, inns and associated industries in Australia for over 30 years. He is currently working on a comprehensive history of the hotel and liquor industry in the Illawarra region of NSW. Besides writing a number of history books, Mick has owned and managed several community newspapers. He was one time editor of the Wollongong Northern News, The Bulli Times, The Northern Times, The Northern Leader and The Local - all located in the Wollongong region. As a journalist he has worked for Rural Press, Cumberland (News Limited), Sydney based, City News, and Torch Publications based in Canterbury Bankstown, NSW. He currently calls the inner-Sydney suburb of Surry Hills home.
View all posts by Mick Roberts »
« Bulli Pass reopens after Ousley closure
Stolen monkeys found »