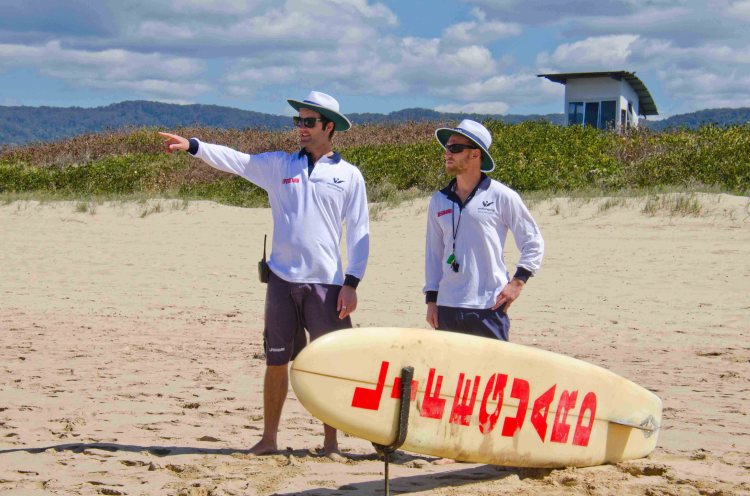 Flags go up for another season

Wollongong City Council is the first in Australia to trial new shark deterrent technology as part of a management strategy announced for the 2017/18 swim season.

The flags have gone up for another season today (Saturday September 23).

Council Lifeguards and volunteer surf lifesavers will be stationed at Wollongong’s 17 beaches from today until Sunday April 29 2018. Beach-goers are reminded never to swim at unpatrolled beaches and all swimmers are strongly advised to heed all surf warnings.

Wollongong City Council is the first Council in Australia to trial the Shark Shield devices, which will be attached to the lifeguard’s jet skis that are used to herd sharks away from beaches. Council’s Recreation Services Manager, Mark Bond said while there has only had three shark sightings on Wollongong beaches last year, it was felt important to take a proactive approach for this year’s swim season, to continue keeping people in the water and lifeguards safe.

“We have 42 kilometres of coastline with 17 patrolled beaches – the biggest service in NSW – which services not only residents of the Illawarra, but more increasingly visitors from South Western Sydney, with over one million beach users every summer,”he said.

An estimated 1.2 million people visited beaches from Stanwell Park to Windang during the 2016/17 swim season. Lifeguards conducted more than 42,000 preventative actions and 544 rescues.

“As the use of Shark Shield on jet skis is a new initiative, the company that makes them are donating their services to us for this trial,” Mr Bond said.

Following a competitive tendering process, Touchdown Helicopters were awarded the contract to provide coastal aerial patrols throughout the 2017/18 summer swimming season. Hover UAV have been contracted to conduct the drone surveillance.

For more information on beach patrol hours and beach safety, contact our Customer Service Team on (02) 4227 7111 or visit Council’s website at www.wollongong.nsw.gov.au

Sharks have small short-range electrical receptors in their snouts used for locating food. Shark Shield’s unique three-dimensional electrical waveform turns sharks away by causing unbearable spasms in these sensitive receptors. Used by professionals around the world, including by navies and for surfing contests in South Africa, Shark Shield is a safety device providing peace of mind, while supporting the conservation of sharks.
Watch a video of a Shark Shield surf board deterrent test being performed with numerous sharks in the North West of Australia:

A journalist, writer and historian, Mick Roberts specialises in Australian cultural history, particularly associated with the Australian hotel and liquor industry. Mick has had an interest in revealing the colourful story of pubs, inns and associated industries in Australia for over 30 years. He is currently working on a comprehensive history of the hotel and liquor industry in the Illawarra region of NSW. Besides writing a number of history books, Mick has owned and managed several community newspapers. He was one time editor of the Wollongong Northern News, The Bulli Times, The Northern Times, The Northern Leader and The Local - all located in the Wollongong region. As a journalist he has worked for Rural Press, Cumberland (News Limited), Sydney based, City News, and Torch Publications based in Canterbury Bankstown, NSW. He currently calls the inner-Sydney suburb of Surry Hills home.
View all posts by Mick Roberts »
« Revitalising Corrimal
Facelift for Austi beach landmark »