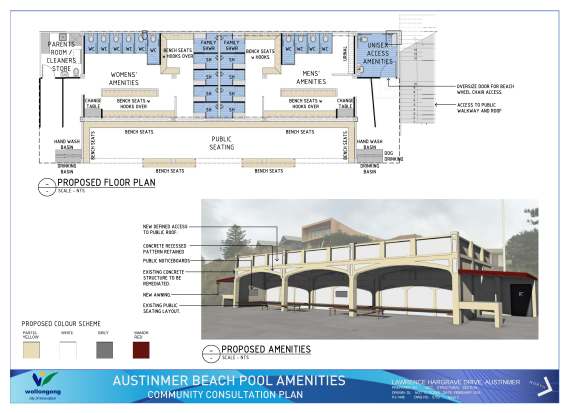 WOLLONGONG City Council held a community information session at Austinmer on Saturday morning to provide an update on plans to renew the beach’s historic amenities building.

At the session, people were able to view the revised design for the building, which was altered following a community outcry over the previous plan in October-November.

“Last year we asked the community what they thought of a proposed design to update and refurbish this ageing building and we received lots of feedback, which was terrific,’’ Wollongong Lord Mayor Gordon Bradbery said.

“Through our consultation the community made it clear they consider this building as much more than an amenities building. They did not want the wood composite material and large cut out male and female figures on the front of the building. We welcome this feedback, and have adjusted the plans while also taking into account the building’s heritage significance.

“This Saturday we’ll be on site at the amenities building between 10am and 12 noon to let people know what has been changed in the design and to run through the next steps in the process of refurbishing this building.’’

The key changes to the design following community engagement include the removal of the cladding and the large male and female figures denoting the toilets. We’ve also added more seating on the building’s northern and southern ends, and will build full width stairs with handrails to provide access to the roof.

In addition, the external wall at the southern end will be extended to try and reduce the impact of big seas on the building.

Inside, there is better segregation between the toilets and the changing area. The toilets are on the western wall and shower doors will be fitted for privacy. There’ll also be bench seats and hooks in each cubicle, and incorporated a family change room on the building’s southern end.

“I’d like to thank everyone who took the opportunity to provide us feedback on the proposed design to the amenities building,’’ Cr Bradbery said.

“We value feedback as it provides us with the opportunity to work together to improve a treasured community space in a way that works for all users.”

Council will now complete a detailed design for the building and, once these have been completed, go out to tender for the construction contract. Construction is scheduled for winter 2019.

A Sydney journalist, writer and historian, Mick Roberts specialises in Australian cultural history, particularly associated with the Australian hotel and liquor industry. Mick has had an interest in revealing the colourful story of pubs, inns and associated industries in Australia for over 30 years. He is currently working on a comprehensive history of the hotel and liquor industry in the Illawarra region of NSW. Besides writing a number of history books, Mick has owned and managed several community newspapers. He was one time editor of the Wollongong Northern News, The Bulli Times, The Northern Times, The Northern Leader and The Local - all located in the Wollongong region. As a journalist he has worked for Rural Press, Cumberland (News Limited), Sydney based, City News, and Torch Publications based in Canterbury Bankstown, NSW. He currently calls the inner-Sydney suburb of Surry Hills home.
View all posts by Mick Roberts »
« Boaties take out Australia Day honours
Tarrawanna blaze »