THE launch of a new reusable shopping bag that will support the next generation of environmental champions and the phase out of plastic straws from sale are among a number of sustainability initiatives customers shopping at Woolworths Bulli, Corrimal and Fairy Meadow will start to see soon.

This follows an announcement made by Woolworths Group CEO Brad Banducci on the eve of World Environment Day at an industry sustainability event hosted by the company.

With the removal of single-use plastic shopping bags from June 20, Woolworths Bulli, Corrimal and Fairy Meadow are changing their popular green, reusable bags available for customers to purchase in store to a Bag for Good.

Woolworths Bulli, Corrimal and Fairy Meadow Group Manager, Lisa Ingram said the Bag for Good costs 99 cents, and when it gets damaged, will be replaced for free.

“We’ll then recycle your old bag via the REDCycle program,” she said.

Any money made from the sale of the Woolworths Bag for Good will fund the Junior Landcare grants program, encouraging young Australians to play an active role in ensuring the sustainable future of their environment.

“They will have the opportunity to have hands-on environmental education in the class and in the schoolyard, which will only help to better future generations,” he said.

“We look forward to seeing applications from schools in the local area when the next grant round is launched in a couple of months’ time.” 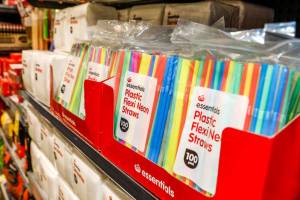 Plastic straws will also no longer be available for sale at Woolworths Bulli, Corrimal and Fairy Meadow by the end of this year.

“It has been well documented that plastic straws do significant harm to marine wildlife and this move will help reduce the impact of plastics on the marine environment,” Ms Ingram said

“Across Australia and New Zealand this move will see us remove 134 million straws from circulation each year.”

Woolworths will also continue its ongoing program of plastic reduction in fruit and vegetables, which has seen the removal of 140 tonnes of plastic in the last year in Australia. A further 80 produce items are earmarked for plastic reduction trials in the next 12 months.

Planet Ark CEO Paul Klymenko said Woolworths’ is taking big strides in the right direction and the butterfly effect of the initiatives on the community and environment is powerful.

“Cutting down on single use plastic waste such as straws is so important – businesses getting behind this is key but as an individual, you can also make a difference by switching to reusable or recyclable options.”

A journalist, writer and historian, Mick Roberts specialises in Australian cultural history, particularly associated with the Australian hotel and liquor industry. Mick has had an interest in revealing the colourful story of pubs, inns and associated industries in Australia for over 30 years. He is currently working on a comprehensive history of the hotel and liquor industry in the Illawarra region of NSW. Besides writing a number of history books, Mick has owned and managed several community newspapers. He was one time editor of the Wollongong Northern News, The Bulli Times, The Northern Times, The Northern Leader and The Local - all located in the Wollongong region. As a journalist he has worked for Rural Press, Cumberland (News Limited), Sydney based, City News, and Torch Publications based in Canterbury Bankstown, NSW. He currently calls the inner-Sydney suburb of Surry Hills home.
View all posts by Mick Roberts »
« Bellambi servo stabbing
Fairy Meadow hydroponic house raid »