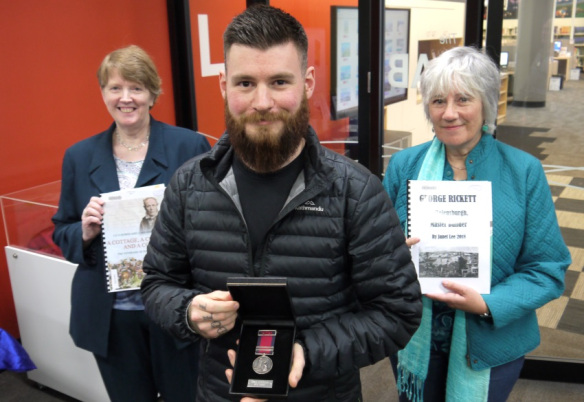 THREE historians have shared Wollongong City Libraries’ $5,000 Biennial Local History Prize for their works on the settlement of Dapto Creek by veterans and on the history of a Helensburgh master builder.

JGD Howes and Lorraine Neate presented a research paper on the early settlement of West Dapto, following the then Government decision to provide land for retired military settlers in 1829. The paper includes an in depth study of the lives of the veterans before and after their arrival in Australia.

Janet Lee shared in the first prize with her paper on George Rickett, a former Helensburgh Helensburgh identity who contributed much to his community. Ms Lee’s work pulls together information on Rickett’s life, the buildings he erected and his contributions to Helensburgh and Stanwell Park during the late 1800s and early 1900s.

The inaugural Local History Prize was awarded in 2016 to Julianne Morris for research into six women who were incarcerated at Wollongong Goal from 1859 to1915.

Wollongong City Deputy Lord Mayor David Brown said the Local History Prize is a prestigious award for research into the city’s past.

“We have thousands of stories in our city. With such wonderful stories from Aboriginal ownership through to early settlement and our mining and industrial heritage, there are plenty of research papers to delve into,” Cr Brown said.

“This year we have seen a variety of research into varied fields such as Bulli coal mining families or the veterans of Dapto Creek and remembering our forebears who served in World War I.

“I thank the Friends of Wollongong City Libraries who have helped to support this prize through sponsorship and participation in the judging process.”

The aim of the History Prize is to encourage original research into the history of people, places and events in the Wollongong local government area and ensure this material is available to researchers and community members now and into the future.

The entries were judged by a panel consisting of representatives of the Friends of Wollongong City Library Executive, a local history expert from our local community, Council’s Manager Library and Community Services, Council’s Heritage officer and Local Studies Librarian.

These 10,000 to 20,000 word original research papers will be catalogued and held in the Local Studies Collection; additional copies will also be available for loan.

With the ongoing support of the Friends of Wollongong City Libraries, the competition will be run again in 2020.

A Sydney journalist, writer and historian, Mick Roberts specialises in Australian cultural history, particularly associated with the Australian hotel and liquor industry. Mick has had an interest in revealing the colourful story of pubs, inns and associated industries in Australia for over 30 years. He is currently working on a comprehensive history of the hotel and liquor industry in the Illawarra region of NSW. Besides writing a number of history books, Mick has owned and managed several community newspapers. He was one time editor of the Wollongong Northern News, The Bulli Times, The Northern Times, The Northern Leader and The Local - all located in the Wollongong region. As a journalist he has worked for Rural Press, Cumberland (News Limited), Sydney based, City News, and Torch Publications based in Canterbury Bankstown, NSW. He currently calls the inner-Sydney suburb of Surry Hills home.
View all posts by Mick Roberts »
« Showground future under microscope
Corrimal’s festival springs into action »