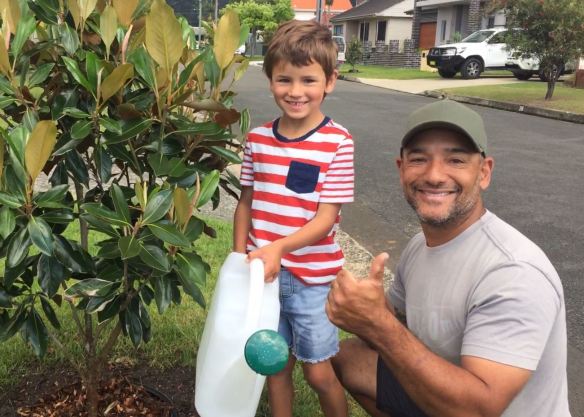 Fairy Meadow residents give the urban greening strategy the thumbs up

With many unshaded areas across the northern suburbs, the Council says it’s important that the right trees are planted in the right place to insure a liveable city.

To help identify street and park locations where the community would like more trees, Council’s Have Your Say website has an interactive map where you can drop pins to highlights areas that need shade.

Already numerous sites have been identified by residents as needing more shade trees at Helensburgh,  including Charles Harper Park, near Helensburgh swimming pool.

Other sites have been identified at Clifton, near the Sea Cliff Bridge car park, and along the footpath between Scarborough Public School and Clifton School of Arts.

“Now that we’re in the middle of summer, we’re asking residents to drop a pin on a shade survey map to show us where the hot spots are around our city,” Wollongong Lord Mayor, Gordon Bradbery said.

“Planting trees in key locations is a positive solution to cooling down our streets and neighbourhoods. Shade trees can reduce daytime temperatures by 5 to 20 degrees Celsius and improve mental health, increased property value and reduce energy costs. So, if you know a spot in the public realm that would benefit from some leafy shade let us know.

We’re also seeking feedback on where the shady spots are so we can learn from what is already working well.”

This survey is part of the new Urban Greening Strategy, which will guide how the Council plan to protect and maintain existing trees and grow the tree canopy cover across the city over the next 20 years.

To Have Your Say visit: https://www.haveyoursaywollongong.com.au/summer-shade

A journalist, writer and historian, Mick Roberts specialises in Australian cultural history, particularly associated with the Australian hotel and liquor industry. Mick has had an interest in revealing the colourful story of pubs, inns and associated industries in Australia for over 30 years. He is currently working on a comprehensive history of the hotel and liquor industry in the Illawarra region of NSW. Besides writing a number of history books, Mick has owned and managed several community newspapers. He was one time editor of the Wollongong Northern News, The Bulli Times, The Northern Times, The Northern Leader and The Local - all located in the Wollongong region. As a journalist he has worked for Rural Press, Cumberland (News Limited), Sydney based, City News, and Torch Publications based in Canterbury Bankstown, NSW. He currently calls the inner-Sydney suburb of Surry Hills home.
View all posts by Mick Roberts »
« Labor promises $5M investment in escarpment walking tracks
Forum to discuss impact of coal mining on water catchment areas »