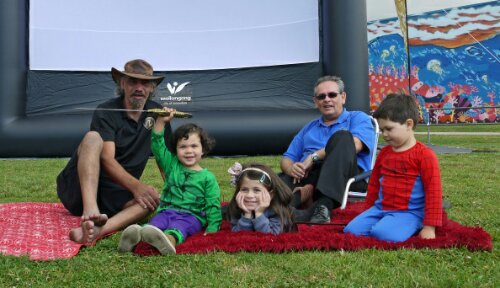 MOONLIGHT Movies are back for 2019 with The Never Ending Story to play on the big screen this Saturday February 16 at Robert Ziems Park, Corrimal.

The cult classic was adapted from Michael Ende’s children’s book and follows the adventures of Bastain Balthazar Bux. Released in 1984, the much-loved adventure film for kids of all ages tells how young Bastian used his imagination to save a dying fantasy land.

Bring a picnic blanket, friends and family and snacks for a fun night out for the whole family. Gates open at 6.30pm and the film will screen from sunset (8pm), with food and drink available to purchase onsite.

Headphones and/or hearing loops are available for use for people who are hearing impaired and can be booked via Wollongong City Council’s events team on (02) 4227 7111. This is an alcohol-free event.

For more information about this and other Moonlight Movies, visit the Council’s website or call the Council on (02) 4227 7111.

Thirroul Beach Reserve will be the venue for another Moonlight Movie night on Saturday, April 6 from 5.30pm with the screening of Coco.

A Sydney journalist, writer and historian, Mick Roberts specialises in Australian cultural history, particularly associated with the Australian hotel and liquor industry. Mick has had an interest in revealing the colourful story of pubs, inns and associated industries in Australia for over 30 years. He is currently working on a comprehensive history of the hotel and liquor industry in the Illawarra region of NSW. Besides writing a number of history books, Mick has owned and managed several community newspapers. He was one time editor of the Wollongong Northern News, The Bulli Times, The Northern Times, The Northern Leader and The Local - all located in the Wollongong region. As a journalist he has worked for Rural Press, Cumberland (News Limited), Sydney based, City News, and Torch Publications based in Canterbury Bankstown, NSW. He currently calls the inner-Sydney suburb of Surry Hills home.
View all posts by Mick Roberts »
« Greens call for frequent “all-stop” trains
Expect delays during Walker Street culvert replacement at Helensburgh »