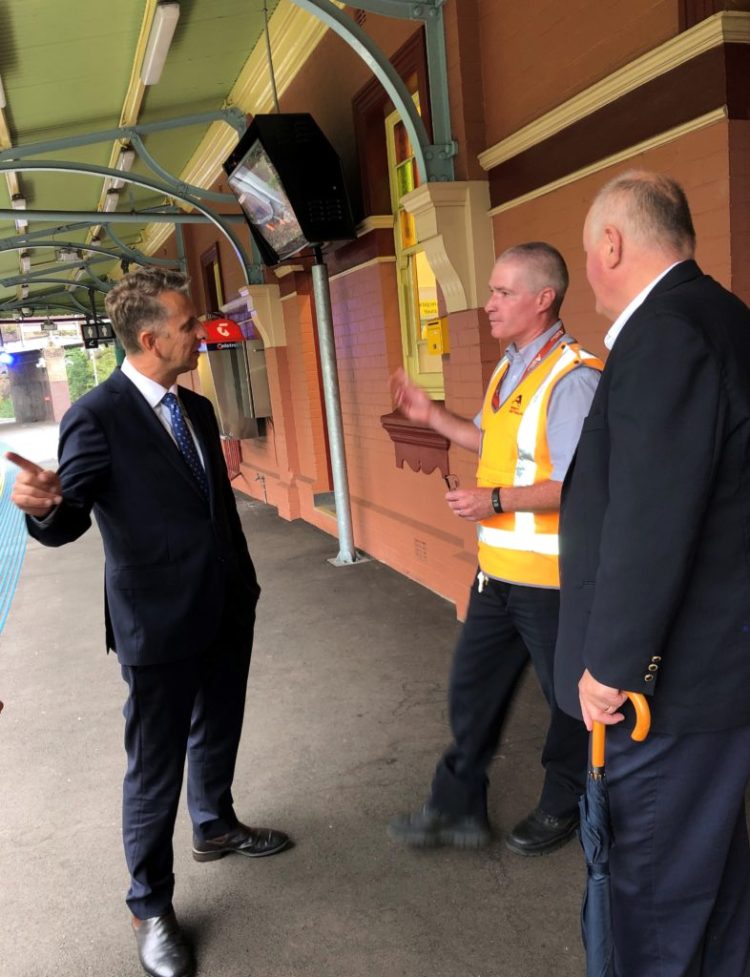 NSW Minister for Transport and Infrastructure Andrew Constance was at Helensburgh Railway Station this morning promising that a re-elected Liberal Government would deliver additional train carriages on the South Coast line.

NEW train carriages and extra seats to address a huge spike in customer demand has been promised by the NSW Government as transport gears-up as a major election issue ahead of the March 23 poll.

Minister for Transport and Infrastructure Andrew Constance was at Helensburgh Railway Station this morning promising that a re-elected Liberal Government would deliver an additional 42 New Intercity Fleet carriages, which will see eight car trains increased to 10 car trains for peak hour services on the South Coast line.
The Liberals investment in South Coast services also includes an extra peak hour service between Wollongong and the Sydney CBD, providing a 15 minute frequency for express services at Wollongong, North Wollongong, Thirroul and Helensburgh in the peaks.

Other improvements to the line will include:
• An extra off peak service each hour between Wollongong and the Sydney CBD, meaning a train every 30 minutes; and
• Expanded weekend OSCAR services, which will see most four carriage trains increased to eight carriage trains early next year.

Mr Constance said the new Intercity Fleet carriages will provide a much needed extra 13,000 seats for South Coast customers across the busiest times of the week.

“We are also improving weekend services between Kiama, Wollongong and Sydney as part of the NSW Government’s $4.3 billion More Trains, More Services program,” he said.

“It will add 20,000 extra seats by making 22 four car OSCAR services between the South Coast and Sydney eight car services from January.

“This is great news for customers on one of the fastest growing lines on the network. We now have 1.7 million extra passengers catching trains on the South Coast, compared to seven years ago.”

Member for Kiama and Parliamentary Secretary for the Illawarra and South Coast Gareth Ward said the NSW Government has introduced over 36,000 new public transport services across the state since 2011.

“This will stimulate more growth for local businesses, with the trip from Sydney on the train more attractive and easier for visitors, as well as making the trip to work easier for locals,” he said.

The 42 additional New Intercity Fleet carriages will bring the total number ordered to 554.

A Sydney journalist, writer and historian, Mick Roberts specialises in Australian cultural history, particularly associated with the Australian hotel and liquor industry. Mick has had an interest in revealing the colourful story of pubs, inns and associated industries in Australia for over 30 years. He is currently working on a comprehensive history of the hotel and liquor industry in the Illawarra region of NSW. Besides writing a number of history books, Mick has owned and managed several community newspapers. He was one time editor of the Wollongong Northern News, The Bulli Times, The Northern Times, The Northern Leader and The Local - all located in the Wollongong region. As a journalist he has worked for Rural Press, Cumberland (News Limited), Sydney based, City News, and Torch Publications based in Canterbury Bankstown, NSW. He currently calls the inner-Sydney suburb of Surry Hills home.
View all posts by Mick Roberts »
« Woonona murder charge after woman found dead in Gray Street
Oxygen resuscitation kits delivered to northern Illawarra surf life saving clubs »