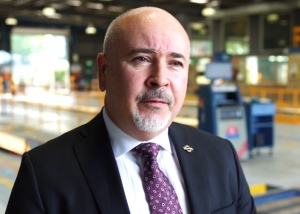 THREE minor defect notices were issued to the company involved in the serious truck crash on Bulli Pass earlier this week after a joint operation between Roads and Maritime Services (RMS) and NSW Police this morning.

Emergency services were called to Bulli Pass after the truck left the road and crashed before catching fire about 3.30pm on Monday.

The crash resulted in the Prince’s Highway being closed in both directions for a number of hours. Investigations into the crash are continuing.

Early this morning, six trucks and five trailers belonging to the company involved in the crash were inspected at Wetherill Park Heavy Vehicle Inspection Station.

During the inspections, three minor defect notices were issued for a minor air leak, minor brake imbalance and a seatbelt which was slow to retract.

RMS director of compliance, Roger Weeks said the safety of all road users is the primary concern for Roads and Maritime.

“Any time there is a major crash on our roads involving a heavy vehicle, the company involved can expect their fleet of vehicles to be inspected,” Mr Weeks said.

“While the company involved in today’s inspections only had minor defects, Roads and Maritime will continue to conduct compliance operations to ensure no one is cutting corners when it comes to the safety of their heavy vehicles.

“Under the Heavy Vehicle National Law, everyone in the supply chain has an obligation to ensure breaches of road transport laws, particularly relating to safety, do not occur. Heavy fines apply to those who do not follow the law.”

“We will not stop carrying out compliance checks and compliance operations until we can ensure dangerous trucks are off our roads,” Mr Corboy said.

“Operators and drivers who are not doing the right thing are unfairly putting everyone else on the road at risk and we will continue to do everything we can to make sure they are taken off our roads.”

A journalist, writer and historian, Mick Roberts specialises in Australian cultural history, particularly associated with the Australian hotel and liquor industry. Mick has had an interest in revealing the colourful story of pubs, inns and associated industries in Australia for over 30 years. He is currently working on a comprehensive history of the hotel and liquor industry in the Illawarra region of NSW. Besides writing a number of history books, Mick has owned and managed several community newspapers. He was one time editor of the Wollongong Northern News, The Bulli Times, The Northern Times, The Northern Leader and The Local - all located in the Wollongong region. As a journalist he has worked for Rural Press, Cumberland (News Limited), Sydney based, City News, and Torch Publications based in Canterbury Bankstown, NSW. He currently calls the inner-Sydney suburb of Surry Hills home.
View all posts by Mick Roberts »
« New plans for Corrimal coke works site
Latest plan for Corrimal Coke Works revealed at community meeting »