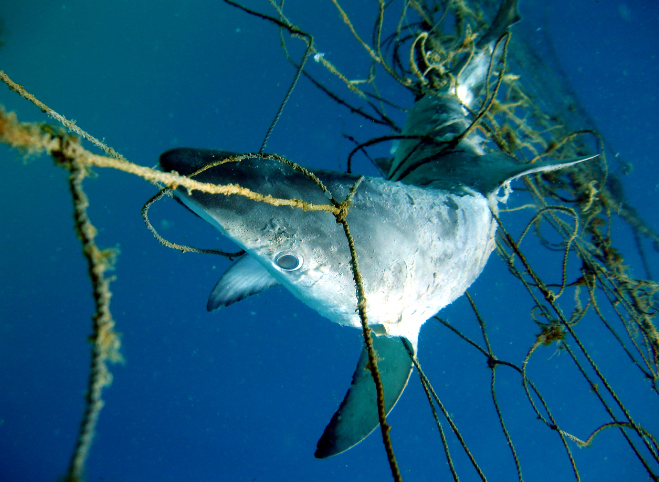 A  shark caught in a net. Photo: Humane Society International.

CONSERVATIONISTS are strengthening their call for a permanent end to the shark net program which it says kills hundreds of marine animals each year at 51 beaches between Newcastle and Wollongong.

Currently there are shark nets off Coledale, Austinmer, and Thirroul beaches. Nets are also located at Wollongong City and North Wollongong beaches.

With the end of the swimming season on Sunday, the shark nets will come out of the water this week designed to avoid the peak period for whale migration along the NSW coastline.

Responding to footage released by the Humane Society International showing a Scalloped Hammerhead Shark caught and killed in a shark net at Palm Beach on Sydney’s Northern Beaches, newly NSW Independent MLC Justin Field has backed the call for an end to the net program, and a move toward non-lethal shark management strategies.

Mr Field said shark nets are a culling device that do little to protect swimmers but indiscriminately kill hundreds of marine animals including dolphins, rays, turtles and non-threatening sharks every year in NSW waters.

“I am backing up calls from the community and from conservation groups for today to be the last day these nets are in the water. Healthy oceans need sharks,” Mr Field said.

“It’s clear that shark nets are an outdated technology with no place in a modern, evidence-based approach to managing the risk of shark bites at our beaches.”

Mr Field said there are a host of non-lethal alternatives to shark management that are more cost effective and reliable than shark nets. These include:

“There is an opportunity with a new Government and new ministers for a reset on shark management in NSW,” he said.

The NSW Government announced in August 2018 it will remove nets from the NSW North Coast over summer following two net trials and community feedback. However, while a third trial did not go ahead, the Minister for Primary Industries has the discretion to put the nets back in at any time if there is sufficient evidence of an increase in shark activity or a change in community sentiment.

The Department said there are no plans to remove shark nets from beaches between Newcastle-Sydney and Wollongong.

A journalist, writer and historian, Mick Roberts specialises in Australian cultural history, particularly associated with the Australian hotel and liquor industry. Mick has had an interest in revealing the colourful story of Australian pubs and associated industries for over 30 years. He is working on a comprehensive history of the hotel and liquor industry in the Illawarra region of NSW. Besides writing a number of history books, Mick managed several community newspapers. He has been editor of the Wollongong Northern News, The Bulli Times, The Northern Times, The Northern Leader and The Local - all located in the Wollongong region. As a journalist he has worked for Rural Press, Cumberland (News Limited), the Sydney city newspaper, City News, and Torch Publications based in Canterbury Bankstown, NSW.
View all posts by Mick Roberts »
« How a pocket book saved the life of Private John Croft at Gallipoli
Emergency services radio boost between Stanwell Tops and Garrawarra »