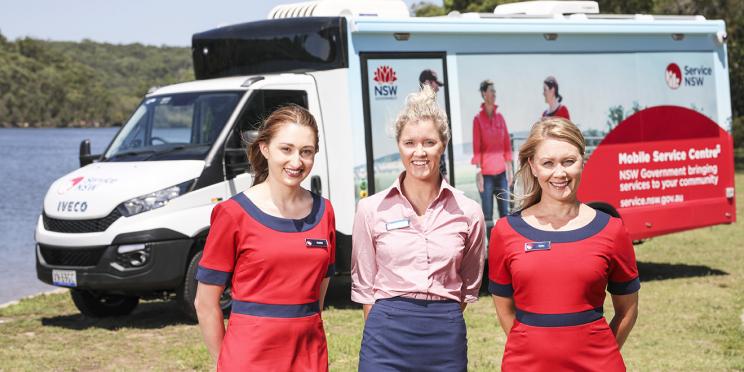 State MP for Heathcote Lee Evans said the custom fitted Service NSW bus will save people time and money and spend about 46 weeks a year on the road in areas where Service NSW has no existing physical presence.

“These buses will take Service NSW to people’s front steps, saving them not only time, but also money,” Lee Evans MP said.

“The buses will perform every major Service NSW transaction including Driver Knowledge Tests as well as Cost of Living appointments.”

Since 2013, Service NSW has become a one stop shop for vital services such as getting a birth certificate, a Seniors Card, driver licence and vehicle registration. It is also a gateway to household savings and can help people access important cost of living programs, such as Energy Switch, $100 Active Kids and Creative vouchers and cheaper Green Slips.

Mr Evans said the bus will roll through towns with advanced notice so the community knows when to expect a visit and what documentation is required to perform their transaction.”

“The Mobile Service Centre will be cashless, with payment options including cheque, EFTPOS or credit card.”

The bus will attend community events such as agricultural field days and festivals throughout the state to complement existing services.

The bus will at Charles Harper Park, Helensburgh next Thursday between from 9am and 3.30pm.

A journalist, writer and historian, Mick Roberts specialises in Australian cultural history, particularly associated with the Australian hotel and liquor industry. Mick has had an interest in revealing the colourful story of Australian pubs and associated industries for over 30 years. He is working on a comprehensive history of the hotel and liquor industry in the Illawarra region of NSW. Besides writing a number of history books, Mick managed several community newspapers. He has been editor of the Wollongong Northern News, The Bulli Times, The Northern Times, The Northern Leader and The Local - all located in the Wollongong region. As a journalist he has worked for Rural Press, Cumberland (News Limited), the Sydney city newspaper, City News, and Torch Publications based in Canterbury Bankstown, NSW.
View all posts by Mick Roberts »
« Lawrence Hargrave Drive roads works
Lawrence Hargrave Drive closed to traffic at Stanwell Park on Monday »