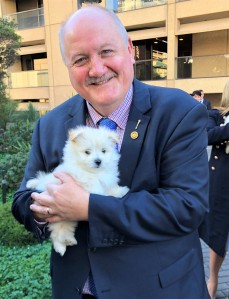 NORTHERN Illawarra residents are being urged to realise the many benefits of dog ownership and adopt a rescue pooch in the lead up to International Dog Day.

State MP for Heathcote Lee Evans (pictured) said August 26 was the perfect opportunity for local residents to welcome a new furry family member into their home by adopting not shopping.

“As anyone who has ever rescued a dog will tell you, they make wonderful and loyal companions,” Mr Evans said.

“Anyone buying an animal from council pounds and shelters as well as 95 re-homing organisations can benefit from a 50 per cent discount on pet registration fees as part of the Government’s efforts to make dog ownership more affordable,” Mrs Hancock said.

“I encourage anyone thinking about welcoming a dog into their lives to visit an RSPCA shelter, any NSW council pound or shelter or one of the many approved re-homing organisations across the State to rescue an animal in desperate need of a home.”

Mrs Hancock said all pet owners could help reduce the numbers of dogs and cats ending up in pounds and shelters in the first place.

“The easiest way to reduce the numbers of lost and unclaimed dogs needing to be re-homed is to follow the three easy steps of responsible pet ownership – microchipping, de-sexing and registering your pet,” she said.

A Sydney journalist, writer and historian, Mick Roberts specialises in Australian cultural history, particularly associated with the Australian hotel and liquor industry. Mick has had an interest in revealing the colourful story of pubs, inns and associated industries in Australia for over 30 years. He is currently working on a comprehensive history of the hotel and liquor industry in the Illawarra region of NSW. Besides writing a number of history books, Mick has owned and managed several community newspapers. He was one time editor of the Wollongong Northern News, The Bulli Times, The Northern Times, The Northern Leader and The Local - all located in the Wollongong region. As a journalist he has worked for Rural Press, Cumberland (News Limited), Sydney based, City News, and Torch Publications based in Canterbury Bankstown, NSW. He currently calls the inner-Sydney suburb of Surry Hills home.
View all posts by Mick Roberts »
« Looking Back history feature: Naked swimming in the Gong
Students have choice of either Bulli or Heathcote for secondary education »