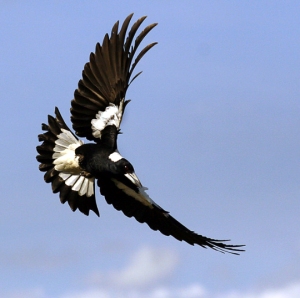 A MAN has died after trying to avoid a swooping magpie at Woonona.

Police are investigating after the incident at Nicholson Park yesterday.

About 8.15am on Sunday, the 76-year-old man was riding a pushbike on an off-road path when witnesses report he rode off the path to avoid a swooping magpie.

The man then collided with a fence post, causing him to be thrown to the ground, suffering serious head injuries.

The cyclist was treated on-scene before being airlifted to St George Hospital in a critical condition.

Despite medical efforts, the man died on Sunday evening.

Wollongong police are investigating the incident and a report will be prepared for the Coroner.

A journalist, writer and historian, Mick Roberts specialises in Australian cultural history, particularly associated with the Australian hotel and liquor industry. Mick has had an interest in revealing the colourful story of Australian pubs and associated industries for over 30 years. He is working on a comprehensive history of the hotel and liquor industry in the Illawarra region of NSW. Besides writing a number of history books, Mick managed several community newspapers. He has been editor of the Wollongong Northern News, The Bulli Times, The Northern Times, The Northern Leader and The Local - all located in the Wollongong region. As a journalist he has worked for Rural Press, Cumberland (News Limited), the Sydney city newspaper, City News, and Torch Publications based in Canterbury Bankstown, NSW.
View all posts by Mick Roberts »
« Looking Back history feature: The Salvos come to Bulli
Appeal for missing man last seen at Scarborough Railway Station »