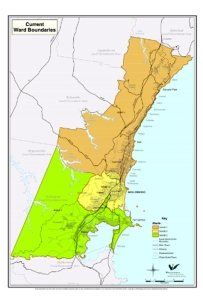 As a consequence of a growing city, the boundaries of Wollongong’s Local Government Area need altering to balance the number of people living within each of the three wards.

Ward 1 covers from Helensburgh south to North Wollongong, Ward 2 is Wollongong in the east to Mt Keira/Mt Kembla in the west and goes as far south as Unanderra. Ward 3 covers Port Kembla to Yallah and west to Wongawilli and the escarpment.

Wollongong City Council Director Corporate Services Renee Campbell said the changes to the boundary between Wards 1 and 2 will affect a small number of residents in North Wollongong, Fairy Meadow and Balgownie.

“The NSW Electoral Commission allows up to a 10 per cent variance in the number of registered voters in each Ward,” she said.

“The growth between our Wards in recent years has seen us have up to a 12 per cent variance between Wards 1 and 3 and that’s why we’re proposing these changes.

Feedback must be received by 5pm on Tuesday November 5 2019. Details of the proposed ward boundary plan and FAQs are available at Council’s Administration Building, and in our branch libraries.

If you would like to make a submission, fill out a feedback form on Council’s website or write to Michelle Martin, Governance and Risk Manager, Wollongong City Council, Locked Bag 8821, Wollongong DC NSW 2500.

A journalist, writer and historian, Mick Roberts specialises in Australian cultural history, particularly associated with the Australian hotel and liquor industry. Mick has had an interest in revealing the colourful story of Australian pubs and associated industries for over 30 years. He is working on a comprehensive history of the hotel and liquor industry in the Illawarra region of NSW. Besides writing a number of history books, Mick managed several community newspapers. He has been editor of the Wollongong Northern News, The Bulli Times, The Northern Times, The Northern Leader and The Local - all located in the Wollongong region. As a journalist he has worked for Rural Press, Cumberland (News Limited), the Sydney city newspaper, City News, and Torch Publications based in Canterbury Bankstown, NSW.
View all posts by Mick Roberts »
« Northern beaches patrols start this weekend
Austinmer’s Brickyard Point to get permanent safety fencing »