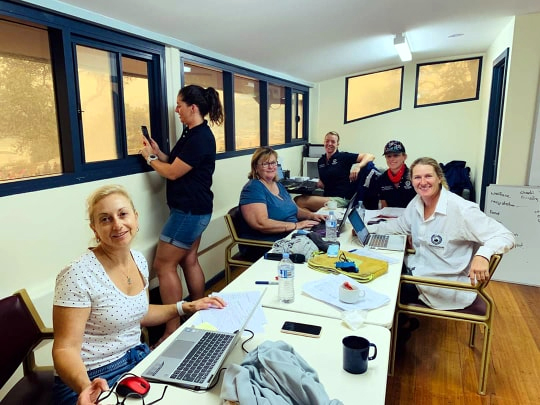 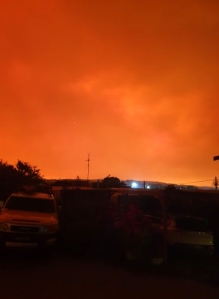 View from the Bermagui Surf Club

Bulli Surf Club members have quickly shifted from competition mode of rowing in the George Bass Surf Boat Marathon back into their core business of lifesaving to support the community after this morning’s bush fires have devastated the far south coast areas around Bermagui and Cobargo.

With an estimated 4,000 people evacuated to the small fishing village of Bermagui, local emergency and support services were becoming overwhelmed and the Bulli members put their hands up to assist.

The Bulli members have been involved in assisting with administration and registration, people and traffic management, and members of our rowing fraternity have been using their muscle to assist elderly residents leave their homes and general walking and door knocking.

Bulli SLSC president, Keith Caldwell, who is onsite at Bermagui, said he is proud of the club members for pitching in and helping in a time of these catastrophic fires.

Mr Caldwell sent the following message from Bermagui: ” All good, just had town briefing… people can leave must by 2pm ….. can only get to Narooma… highway closed…. we’re staying. Linc & myself got involved because at one stage it was everybody evacuated from Bermagui… got downgraded. Proud of some of the boys helping elderly leave there homes, knocking on doors in township…  Maria ,& Chrissy r still working on computers registering people from this morning…”

A journalist, writer and historian, Mick Roberts specialises in Australian cultural history, particularly associated with the Australian hotel and liquor industry. Mick has had an interest in revealing the colourful story of pubs, inns and associated industries in Australia for over 30 years. He is currently working on a comprehensive history of the hotel and liquor industry in the Illawarra region of NSW. Besides writing a number of history books, Mick has owned and managed several community newspapers. He was one time editor of the Wollongong Northern News, The Bulli Times, The Northern Times, The Northern Leader and The Local - all located in the Wollongong region. As a journalist he has worked for Rural Press, Cumberland (News Limited), Sydney based, City News, and Torch Publications based in Canterbury Bankstown, NSW. He currently calls the inner-Sydney suburb of Surry Hills home.
View all posts by Mick Roberts »
« Bulli crew take shelter as catastrophic bushfires halt iconic surf boat race
Woman found with fatal stab wounds at Woonona overnight »