Looking Back history feature: The Uptons and fishing ‘The Cataract’

Scroll down for Looking Back feature…. 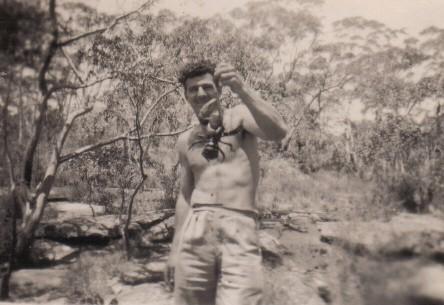 Jack Upton at The Cataract in the 1940s.

FISHING The Cataract has been illegal for over a century but try telling that to the Upton family.

Since the first Upton ventured into the district the family has built a proud heritage and tradition of fishing the rivers and creeks of the Cataract catchment.

This is the story of brothers Jack and Cecil Upton who could be found most weekends fishing the Cataract River on their beloved Bulli Mountain.

The two were born a year apart and were inseparable, the best of mates, and knew the mountain better than anyone.

Born in Hobart St Bulli in 1924, Jack left school at 14 finding work at 16 in Old Bulli Pit. Ces was born a year later in the mining village of Spion Kop – or Pit Town – on the escarpment near Bulli Colliery and followed his brother…

A journalist, writer and historian, Mick Roberts specialises in Australian cultural history, particularly associated with the Australian hotel and liquor industry. Mick has had an interest in revealing the colourful story of Australian pubs and associated industries for over 30 years. He is working on a comprehensive history of the hotel and liquor industry in the Illawarra region of NSW. Besides writing a number of history books, Mick managed several community newspapers. He has been editor of the Wollongong Northern News, The Bulli Times, The Northern Times, The Northern Leader and The Local - all located in the Wollongong region. As a journalist he has worked for Rural Press, Cumberland (News Limited), the Sydney city newspaper, City News, and Torch Publications based in Canterbury Bankstown, NSW.
View all posts by Mick Roberts »
« January school holiday activities in the north
Free green waste collection point at Wombarra on Saturday »