Scroll down for the Looking Back feature: 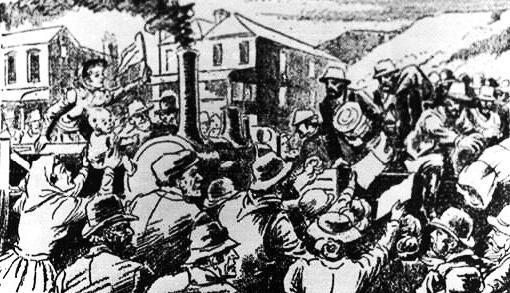 An artists impression of the blockade at Bulli in 1887

THE wives, and mothers and daughters of the Illawarra’s coal miners became powerful voices in the great industrial union movements of the late 19th century.

They rallied behind their men folk with unbound enthusiasm showing overwhelming support in their industrial battles of the 1880s and 90s.

Unionism had been around in the Illawarra since 1878 but it was not until the 1880s women made a dramatic enrichment towards working conditions for their sons and husbands.

Violent incidents were common on NSW coalfields, especially against non-unionists. Such incidents often started with women shouting threats and beating tins (tin kettling) or throwing stones, with the men prepared to enter the fray if non-unionists or police challenged the women. Cutting telegraph wires, barricading road and rail, intimidating non-strikers, and tarring and feathering were strategies used by the unionists.

A journalist, writer and historian, Mick Roberts specialises in Australian cultural history, particularly associated with the Australian hotel and liquor industry. Mick has had an interest in revealing the colourful story of Australian pubs and associated industries for over 30 years. He is working on a comprehensive history of the hotel and liquor industry in the Illawarra region of NSW. Besides writing a number of history books, Mick managed several community newspapers. He has been editor of the Wollongong Northern News, The Bulli Times, The Northern Times, The Northern Leader and The Local - all located in the Wollongong region. As a journalist he has worked for Rural Press, Cumberland (News Limited), the Sydney city newspaper, City News, and Torch Publications based in Canterbury Bankstown, NSW.
View all posts by Mick Roberts »
« Be warned: Rangers will be out in force during Sunday’s Australia Day celebrations
Changed traffic conditions on Maddens Plains during maintenance work »