Swimmers told to ‘butt-out’ on patrolled beaches under new regulations 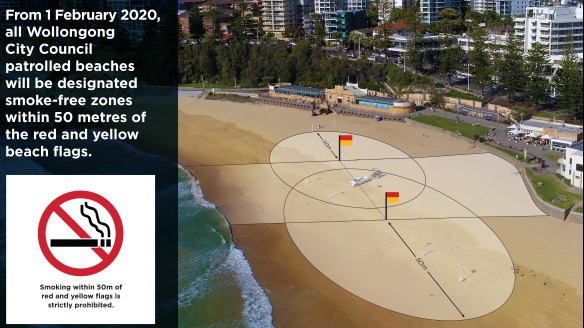 A SMOKING ban will come into force on northern Illawarra’s patrolled beaches from tomorrow.

Smoke-free areas between the red and yellow flags and within 50m of the flags will be in place on Wollongong’s patrolled beaches from tomorrow (Saturday February 1).

Wollongong Lord Mayor Gordon Bradbury said the smoke-free areas will be “self-regulated and supported by signage”.

“This approach has been in place since 2010 and we’ve found the community has complied with smoke-free areas without the need for punitive measures,” he said.

“I ask the public to respect everyone’s right to smoke-free clean air.”

Cr Bradbery said smoking tobacco is the single most preventable cause of ill health and death in Australia.

“While tobacco control is primarily the domain of federal and state governments, local government can encourage communities to lead healthy lifestyles by reducing exposure to smoke in public areas,” he said.

“Smoke-free areas in places where children and families gather can help to ‘de-normalise’ smoking. When our community members or visitors go to the beach, we want them to enjoy a healthy and smoke-free environment.”

A journalist, writer and historian, Mick Roberts specialises in Australian cultural history, particularly associated with the Australian hotel and liquor industry. Mick has had an interest in revealing the colourful story of pubs, inns and associated industries in Australia for over 30 years. He is currently working on a comprehensive history of the hotel and liquor industry in the Illawarra region of NSW. Besides writing a number of history books, Mick has owned and managed several community newspapers. He was one time editor of the Wollongong Northern News, The Bulli Times, The Northern Times, The Northern Leader and The Local - all located in the Wollongong region. As a journalist he has worked for Rural Press, Cumberland (News Limited), Sydney based, City News, and Torch Publications based in Canterbury Bankstown, NSW. He currently calls the inner-Sydney suburb of Surry Hills home.
View all posts by Mick Roberts »
« Two people arrested at Bulli after police car rammed
Swimmers warned of large surf conditions with weekend’s heatwave »