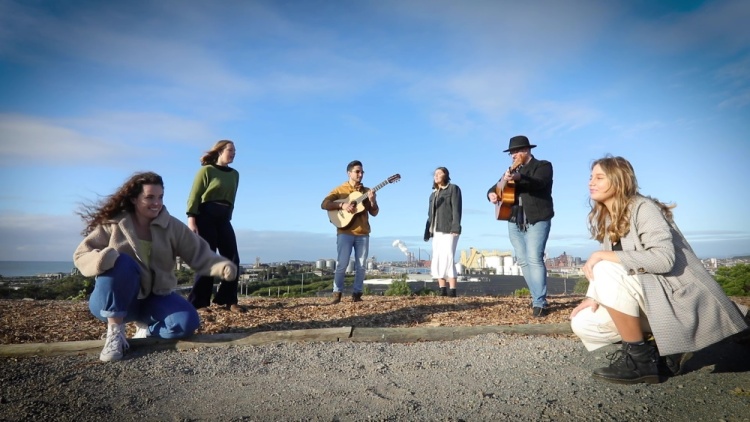 LOCAL musicians, and music, have been given a boost through the development of a new song and video which is being launched to promote Make Music Day on Sunday June 21.

Originating in France 38 years ago, Make Music Day is an international event, with support of the initiative stretching across more than 750 cities in 120 countries.

The concept behind Make Music Day is that all musicians share their music for free whether through their own gig, supporting a musical organisation or getting involved in an event using a digital platform. In addition, even those who can’t play or sing a note, are encouraged to pop on a record or device, and appreciate the skill that’s involved in making music, and the way music influences our lives.

The artists include local folk trio Dear Violet, Erin Hand, Tim Moxey and Sako Dermenjian. The musicians composed and produced a new single, In Our Hands, and shot a music video over a three-day workshop period.

Wollongong Lord Mayor Gordon Bradbery said it is an exciting and inspiring initiative and one that celebrates collaboration and creativity.

“I applaud these artists for coming onboard and getting involved in this creative challenge,” he said.

“Now it’s time for the rest of Wollongong to hear their song, support their courage, and to get out and make some music next Sunday.”

In Our Hands will debut on the City of Wollongong and Creative Wollongong Facebook pages on Sunday June 21. On this date there will also be free live music in Globe Lane, Wollongong between 12 noon-2pm.

A journalist, writer and historian, Mick Roberts specialises in Australian cultural history, particularly associated with the Australian hotel and liquor industry. Mick has had an interest in revealing the colourful story of Australian pubs and associated industries for over 30 years. He is working on a comprehensive history of the hotel and liquor industry in the Illawarra region of NSW. Besides writing a number of history books, Mick managed several community newspapers. He has been editor of the Wollongong Northern News, The Bulli Times, The Northern Times, The Northern Leader and The Local - all located in the Wollongong region. As a journalist he has worked for Rural Press, Cumberland (News Limited), the Sydney city newspaper, City News, and Torch Publications based in Canterbury Bankstown, NSW.
View all posts by Mick Roberts »
« Thousands welcome re-opening of libraries across the region
Teenagers’ close encounter with shark at Waniora Point, Bulli »