THE next stage in the proposal to develop hundreds of homes on the old Corrimal Coke Works site will be discussed at Wollongong City Council on Monday night.

Legacy Property and the Illawarra Coke Company (ICC) have plans for around 700 homes on Railway Street that the developers claim will also preserve significant historical features of the former 18ha industrial site, improve rehabilitation of remnant bushland, and providing housing diversity.

Council placed the Interim Heritage Order on the site in May 2019 after a Complying Development Certificate was issued by a private certifier to the site’s developer. The Certificate allowed for the demolition of the majority of structures on the site.

The order was placed while Council undertook additional studies, and awaited the completion of reports related to the site’s heritage.

Wollongong Lord Mayor Gordon Bradbery said the order allowed outstanding heritage issues to be addressed, and meant that all structures were retrained until a full heritage assessment was completed. 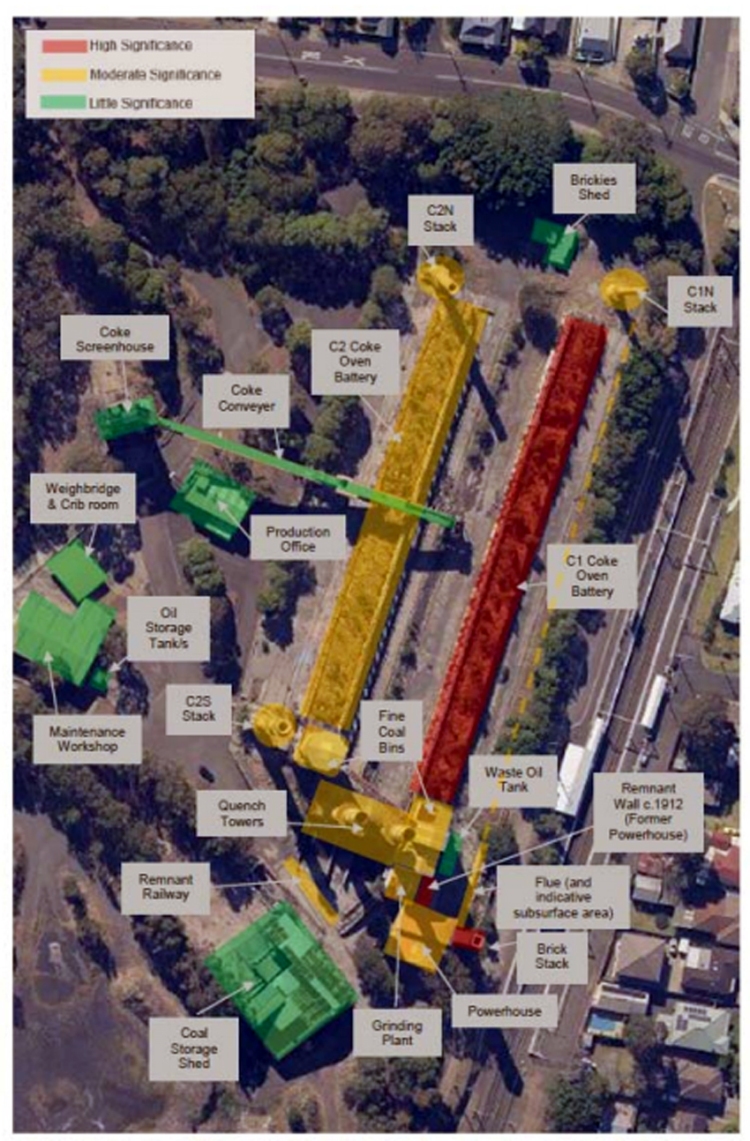 The report recommends that Council resolve to finalise the Heritage Amendment Planning Proposal covering a reduced area from that exhibited.

The State Heritage Register Committee of the NSW Heritage Council is considering whether the site has State heritage significance. A separate report will be provided on the overall draft planning proposal for the site.

Councillors on Monday night will consider recommendations by Council staff to adopt and progress the draft Planning Proposal to list part of the former Corrimal Coke Works site as a local heritage item in the Wollongong Local Environmental Plan.

If adopted by Council, the draft planning proposal will be submitted to the NSW Department of Planning, Industry and Environment for review, allowing an amended Local Environmental Plan for the site.

Council has put forward a significant agenda for Monday’s meeting, which will be broadcast via the web. Some other significant topics to be covered include the consideration of the Operational Plan 2020-2021 and budget, and the Local Strategic Planning Statement.

“This is a truly significant agenda, that sets the tone and direction for our City for the next 12 months and beyond,” Wollongong Lord Mayor Gordon Bradbery said.

“There are some really interesting topics for Council and the community to wrestle with and determine.

“We’ve had some challenging months due to the Coronavirus, but I can assure you Council has not been sitting back and resting. The staff have been working hard and this meeting shows the fruits of their labours, planning and consultations. It’s interesting stuff and one that really delivers for the whole of our community.

“After all, the Operational Plan 2020-2021 sets out what we’re planning to keep Wollongong moving forward, make it the best place it can be and meet the six goals we set with our community as part of Wollongong 2028.

“Then there’s the draft Cycling Strategy, which is coming to Council after an initial round of community engagement last year and input from many stakeholders, and is sure to spark significant interest from those who are regular riders, weekend riders and those who have got on a bike thanks to COVID-19. And the draft Disability Inclusion Action Plan 2020-2025 is a very important piece of work as it details what we’re doing to improve our city.’’

Copies of Council’s Business Papers and a complete agenda for the meeting on Monday June 29 are available on Council’s website. The meeting will be webcast live from 6pm.

A journalist, writer and historian, Mick Roberts specialises in Australian cultural history, particularly associated with the Australian hotel and liquor industry. Mick has had an interest in revealing the colourful story of pubs, inns and associated industries in Australia for over 30 years. He is currently working on a comprehensive history of the hotel and liquor industry in the Illawarra region of NSW. Besides writing a number of history books, Mick has owned and managed several community newspapers. He was one time editor of the Wollongong Northern News, The Bulli Times, The Northern Times, The Northern Leader and The Local - all located in the Wollongong region. As a journalist he has worked for Rural Press, Cumberland (News Limited), Sydney based, City News, and Torch Publications based in Canterbury Bankstown, NSW. He currently calls the inner-Sydney suburb of Surry Hills home.
View all posts by Mick Roberts »
« ‘Towradgi hump’ traffic changes goes back to drawing board
Feedback sought on expanding cycling network across the city »