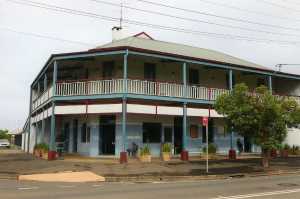 POLICE are investigating whether the theft of an ATM from Mt Kembla Hotel this morning is connected to a break-in at the Bellambi Hotel two hours later.

Wollongong detectives are investigating a possible link to the break-in at the Bellambi Lane pub, which occurred about 5.30am today (Wednesday).

During the break-in, the intruders were disturbed by the hotel’s cleaners and ran from the watering hole empty-handed.

Prior to the Bellambi incident, Wollongong police were called to Mount Kembla Hotel about 3.20am after reports of the theft of an ATM.

Three men smashed the front glass doors of the Cordeaux Road pub and ran inside. The men forcibly removed the ATM and pushed it towards the front doors and into a white Holden Commodore utility that was waiting outside.

The vehicle was last seen heading north on Cordeaux Road.

It has been confirmed that the vehicle used in the break-in was stolen from Maynes Parade, Unanderra, 10 minutes before the Mount Kembla theft. The utility was later found burnt out in Berkley.

Wollongong detectives are keen to speak with anyone who may be able to assist with their inquiries.

Police have been told one of the men appeared to be aged in his early 20s, and was about 180cm tall with a thin build. He was wearing a black balaclava with a black baseball cap and a dark coloured long sleeve top and pants. All men had their faces covered and had dark clothing.

A Sydney journalist, writer and historian, Mick Roberts specialises in Australian cultural history, particularly associated with the Australian hotel and liquor industry. Mick has had an interest in revealing the colourful story of pubs, inns and associated industries in Australia for over 30 years. He is currently working on a comprehensive history of the hotel and liquor industry in the Illawarra region of NSW. Besides writing a number of history books, Mick has owned and managed several community newspapers. He was one time editor of the Wollongong Northern News, The Bulli Times, The Northern Times, The Northern Leader and The Local - all located in the Wollongong region. As a journalist he has worked for Rural Press, Cumberland (News Limited), Sydney based, City News, and Torch Publications based in Canterbury Bankstown, NSW. He currently calls the inner-Sydney suburb of Surry Hills home.
View all posts by Mick Roberts »
« Stanwell Park man on drug and knife charges
Council wants input on pools »